Hypertensive emergencies are defined as sudden and prolonged increases in the arterial blood pressure, with associated organ damage. The degree of increase above that which the patient normally has, and the degree and duration of the rise are not usually taken into account.
No single figure for blood pressure is usually defined, however if a single figure was important, we should be concerned with readings of :Below we will look at each potential emergency and the treatment for it.

​What medications can we use?

​​There are multiple medications available, however I have included the most commonly used medications to make it simpler.
<
>
​
CASE 1. A 45 YO MALE WITH SUDDEN SEVERE CHEST PAIN
45 yo male with sudden onset severe chest pain + pain in upper back.
His BP is BP 165/90, although there is a BP difference between arms of >20mmHg
Given his history, you are concerned about an acute thoracic dissection.

You perform a chest x-ray
There is an obvious widened mediastinum.
​This fits with the clinical picture of a thoracic aortic dissection.​ 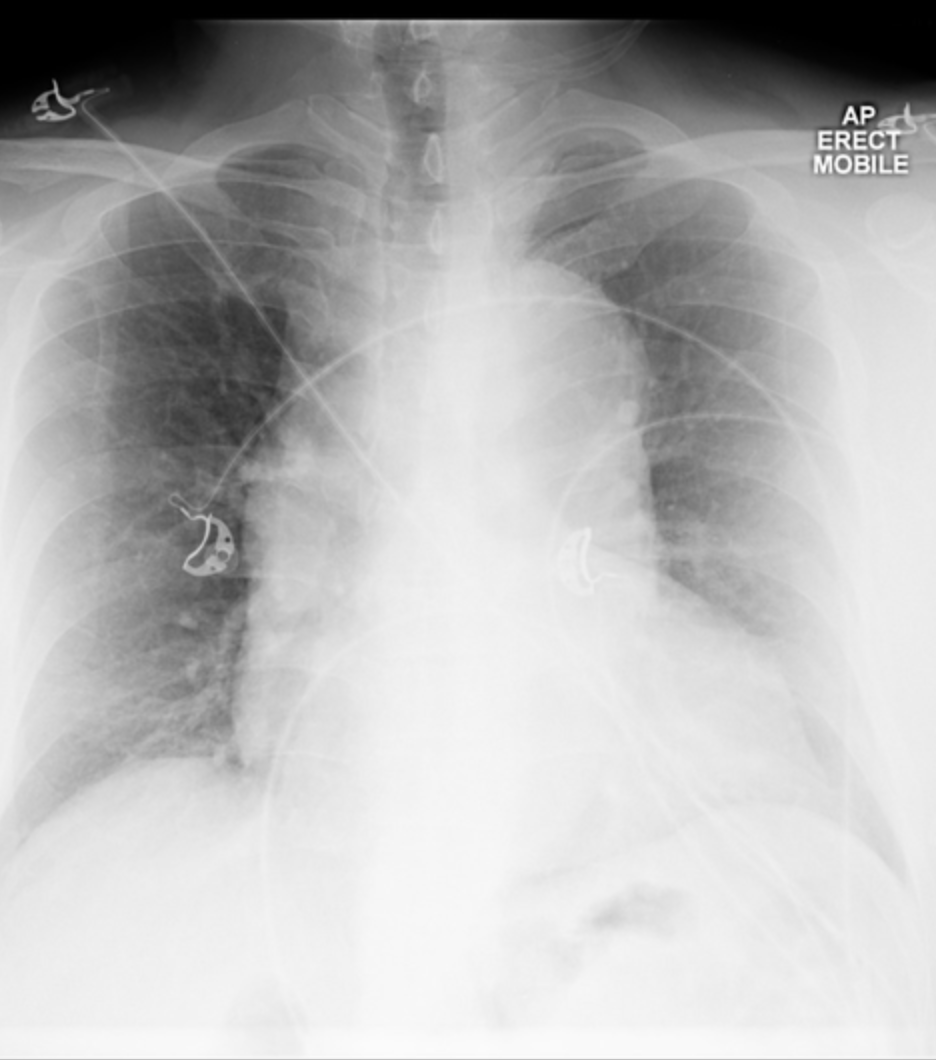 Managment
A Special CaseIf in the above case of the 45 yo with a thoracic aortic dissection, you perform an ecg, which looks like the following. What is this?
If we look at lead

​How do you treat the patient with dissection and HOCM?

Labetalol is still the drug to use.
What if you have no labetalol in your hospital. Then consider esmolol.
What if you don't have that either?

​Can you use GTN or Nitroprusside? 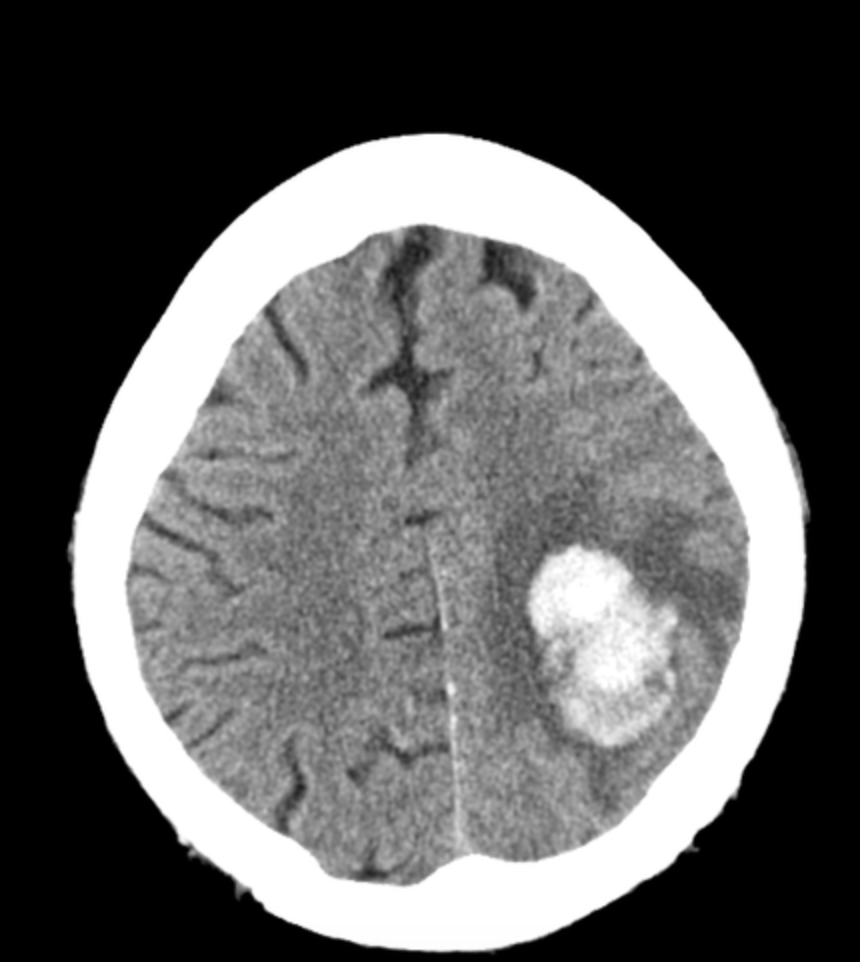 MANAGING BLOOD PRESSURE IN ACUTE CEREBRAL HAEMORRHAGE
THE EVIDENCE
<
>
IntroductionThe ATACH-2 trial (Antihypertensive Treatment of Acute Cerebral Haemorrhage II) is an important trial in respect to the management of intracerebral bleeds.
We know that intra-cerebral bleeds are dynamic, with up to 40% of patients having growth in haemorrhage volume, in the first 3 hours(Stroke 1997:28:1-5). We also know that bleed volume is a determinant of mortality and that bleed volume increase, is related to increased blood pressure(Neurosurgery 1994). Because of this, there has been a push to lower systolic blood pressure(SBP) in acute bleeds. I am not including subarachnoid bleeds in this discussion.
Read the Penumbra Conundrum above were I point out that hemorrhagic strokes are very different to ischaemic strokes. Hemorrhagic strokes have no ischaemic penumbra around the haematoma. Cerebral blood flow slows in the region as does metabolic rate (Stroke 2013:44;620-6).
INTERACT-2 TrialThe INTERACT 2 trial(NEJM 2013: 368: 2355-2365) randomised over 2000 patients into two systolic blood pressure groups:Patients were included within 6 hours of symptom onset. They found no reduction in death or severe disability when lowering blood pressure. There may have been some benefit in subgroup analysis at 90 days for the more intense lowering of SBP. It is important to also mention that no harm was found from lowering the SBP in this study.
The original ATACH-I trial used Nicardipine to lower SBP safely down to 110-140 (Crit Care Med 2010;38:637-648).
ATACH-2 TRIALThe ATACH-2 Trial just released, was a randomised multi centre trial that recruited patients within 4.5 hours of symptom onset. The blood pressures were kept at one of two levels for 24 hours:The primary outcome was disability or death within 3 months.
1000 patients were randomised equally into the two groups. The study was stopped early, short of its 1280 patient target, due to futility. There was no difference in survival or benefit between the 2 groups i.e.., the intense lowering of SBP group and the less aggressive group. There may have been some increase in renal adverse events (not statistically significant) in the first 7 days in the more aggressive group, however the clinical implications of these are unclear.
Both INTERACT -II and ATACH-2 show no benefit in lowering blood pressure in intra-cerebral bleeds.
So where to now? What about the patient with SBP of 220mmHg? The only evidence so far is a study by Kazui S et al(Stroke 1996:27:1783-7) showing that SBP > 220mmHg was directly related to haematoma enlargement.
The American Heart Association recommends 140mmHg. I stick to 140 as my goal for SBP in spontaneous intracerebral haemorrhage. If I get 140-160mmHg i’m happy. If I go below 140, I know that studies have shown no harm.  I try to not have fluctuations, but keep it steady. It is also important to monitor the patient as the SBP is lowered. Some patients with chronic hypertension will have a right shift in their auto regulation curve and lowering their SBP may produce neurological symptoms. They should  have a higher SBP titrated.
Which antihypertensive to use? Remember that the SBP increases due to an increase in systemic vascular resistance (SVR):Beware Sodium Nitroprusside as it can increase cerebral vasodilatation, increasing intracranial pressure.
How to Control Blood Pressure in Intracranial HaemorrhageThe scenario is this:
A 62 year old male is brought in to your emergency department by ambulance. He has had a sudden onset of headache and has decreased use of left side. His vitals are:
GCS 14, HR 92, BP 210/100, Sats 95% on room air. A CT reveals a large intracranial haemorrhage.
Do we lower the blood pressure? If yes, to what do we lower it to? What’s the evidence?

We know that a key determinant of outcome in hemorrhagic stroke is haematoma volume(Stroke 1997;28:1-5), so that a large haematoma, or haematoma expansion is associated with poor outcomes. We also know that intracerebral haemorrhage and associated high blood pressure, has a poor clinical outcome (JHypertension 2005;23:1217-23)
The first thing to make clear is that hemorrhagic stroke is different to ischaemic stroke. In ischaemic stroke, all the fuss related to lysis, is about perfusing and salvaging the penumbra of ischaemic brain tissue, surrounding the dead central tissue.
This penumbra doesn’t exist around hemorrhagic tissue. This region is said to be in a hibernating state and the low cerebral blood flow is matched by a low metabolic rate. CT perfusion scans show no adverse effect on perihaematoma blood flow, with early aggressive BP control to a systolic of less than 150mmHg (Stroke 2013;44:620-26)
What should we lower the blood pressure to?The INTERACT 2 trial (NEJM 2013;368:2355-65) is the largest randomised trial of patients with intracerebral haemorrhage and blood pressures up to 220mmHg, where control was within 6 hours, to two systolic blood pressure groups:
1. <140mmHg
2. <180mmHg
Overall the trial did not show a reduction in death or disability, although there was a trend towards improved functional outcomes in the <140mmHg group.
What is also important is that the group with aggressive blood pressure control to < 140mmHg did not show early neurologic deterioration or adverse events. What it did show, was a lower haematoma volume.
The ATTACH Trial was interesting from this point of view as it had similar arms, but also a third arm that looked at aggressive BP control i.e.., 110-140mmHg. Again, no adverse events with aggressive blood pressure lowering.
Only one study has ever shown poor outcome from aggressive blood pressure lowering to 140mmHg (J Intern Med. 2004;255:257–265)
What about subarachnoid haemorrhage?Not much great evidence here. We know that rebleeding with potentially catastrophic effects can occur in the first 12 hours. This rebleeding is strongly associated with hypertension ie., systolic blood pressure >160mmHg (Arch Neurol.2005;62:410-416). Most recommendations here are consensus opinion.
What do you use to lower blood pressure in intracranial haemorrhage?Aim for short acting, easily titratable and something that doesn’t affect cerebral blood flow.
What would you use for the initial lowering of BP?
(a) Labetalol
(b) GTN infusion
(c) Sodium Nitroprusside
(d) Hydralazine
(e) Nicardipine
I would probably opt for Labetalol 10-20mg bolus every 10-15minutes
If I had Nicardipine, I may opt for that as a first line agent at 1-2mg/hour as an infusion, doubling it every few minutes to a maximum of 16mg/hr. I like this, because of its short half life of 5-10 minutes.
Beware GTN infusion and Sodium Nitroprusside as they can affect cerebral blood flow.
Hydralazine lowers blood pressure very effectively, with an onset at 3-5 minutes. One of it’s side effects is that it increases intracranial pressure (Stroke. 1975;6:402-404), as a balance to this, it also increases cerebral blood flow.
CASE 3. A 68 YO MALE PRESENTS WITH SEVERE HEADACHE AND ARM WEAKNESS
This patient presents very similarly to the previous patient. His GCS is 14/15 and he has a BP of 210/105.
You perform a CT brain, which is shown below.
Whereas the previous patient had an intracerebral bleed, this patient has an ischaemic stroke. 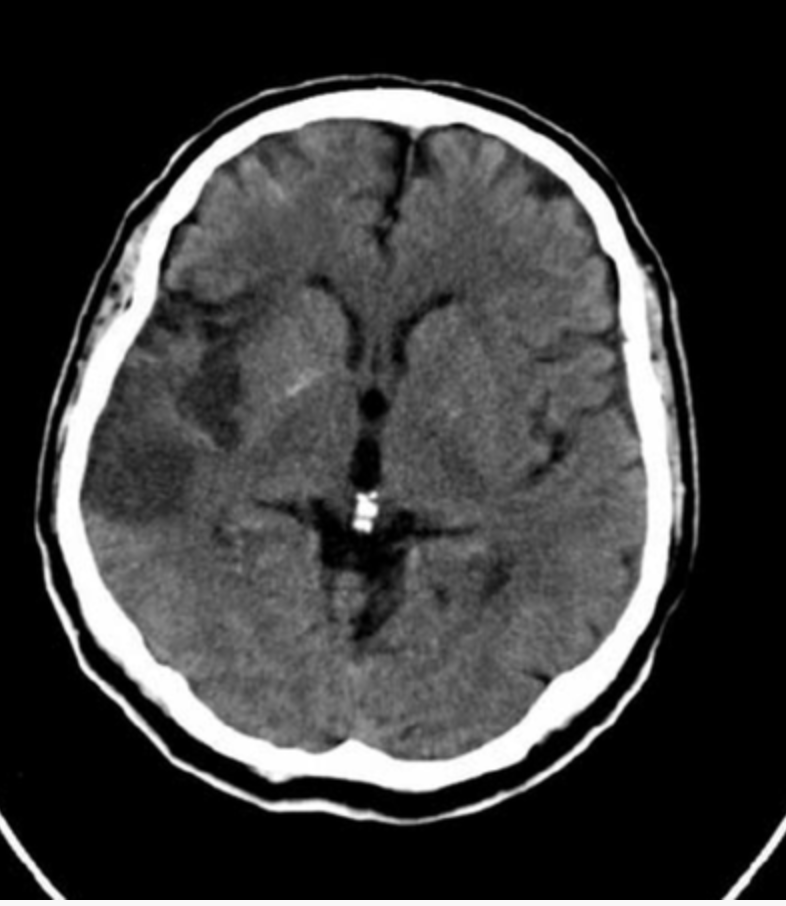 ​SHOULD WE TREAT THE BLOOD PRESSURE?
In making the decision, a critical question to ask is:
IS THE PATIENT SUITABLE FOR THROMBOLYSIS?
​MANAGEMENT

We've look at the intracranial bleed and ischaemia
​What about Subarachnoid Haemorrhage?

CASE 4. A 38 YO WOMAN WHO IS 9 DAYS POST PARTUM
This 38 yo woman is due to have her sutures removed from her caesarean section wound today.
She is headed for clinic, however she comes to the emergency department prior as she has had a headache all day.
Her vitals are normal except for her BP being 168/90.
Is this of concern?
It is safe to lower BP to normal levels quickly here. There is no increased risk of cerebral or cardiac ischaemia
MANAGEMENT
CASE 5. A 27 YO MALE PRESENTS AGITATED AND TACHYCARDIC WITH A BP OF 190/125
​He admits to having taken cocaine.
​WHAT MUST YOU BEWARE OF IN THIS PATIENT?
BEWARE

Beta blockers are CONTRAINDICATED, as they may make the patients heart rate and BP even worse due to blocking beta receptors, resulting in unopposed alpha activity.
​Benzodiazepines are the treatment of choice. 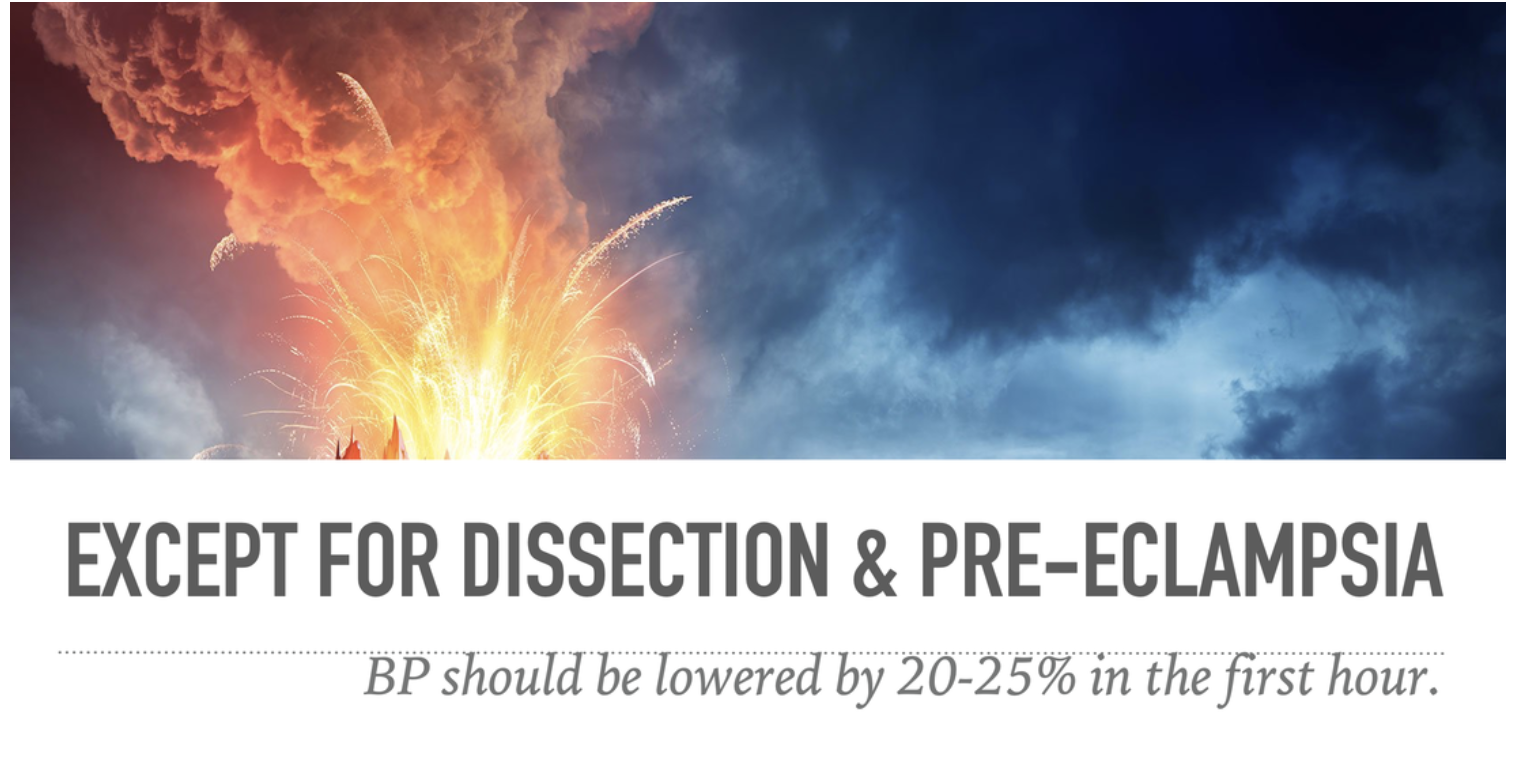 In these two condition, it can be decreased much more rapidly and certainly within the first hour.

​If there is one medication to know well it is:

QUESTION 1: IN A PATIENT WITH A SUSPECTED THORACIC AORTIC DISSECTION, THE BLOOD PRESSURE MUST BE REDUCED RAPIDLY TO A SYSTOLIC OF <120MMHG. TRUE OR FALSE?
ANSWER
True
QUESTION 2: IN A PATIENT WHO IS 32 WEEKS GESTATION AND HAS A BP OF >140/90, THE BP CAN BE REDUCED TO NORMAL LEVELS RAPIDLY. TRUE OR FALSE?
ANSWER
True
QUESTION 3: LABETALOL CAN BE USED TO TREAT ALL CASES OF SEVERE HYPERTENSION. TRUE OR FALSE ?
answer
FALSE:
They cannot be used in those patients with a hyperadrenergic state suchAlso they should be avoided in: