ST elevation myocardial infarction (STEMI) and Non-ST elevation myocardial Infarction (NSTEMI) are how we decide which patients need reperfusion therapy. Thrombolytic trials showed a decreased mortality in those patients initially treated with thrombolytics when presenting with ST elevation(STE). Since this work, STE has been associated with acute coronary occlusion. However, we know that it is much more complex than this.

Larson (1) found that 15-35% of patients going to the cath lab with STE, were false positives. We also know that 25-30%  of patients diagnosed with a NSTEMI have an unrecognised total occlusion(2). This leads to a delay in angiography and a missed or established infarction leading to increased mortality.

The new terminology can assist us in not missing those patients with an occlusive lesion, but no STE. Occlusive Myocardial Infarction(OMI) criteria for ECG interpretation(covered below and sometimes called STEMI equivalents), may indicate near or total occlusion of a coronary vessel without adequate collateral circulation, resulting in an acute myocardial infarction. The alternative of Non-Occlusion Myocardial Infarction (NOMI) refers to cases where there is no occlusion or, there is an occlusion, but with sufficient collateral circulation to avoid acute infarction.

The potential benefit of using OMI instead of STEMI is clearly demonstrated by Meyers et al(3) in their retrospective study looking at the accuracy of STEMI criteria versus ECG findings that may have indicated OMI. In the graph below, patients were split into those that were STEMI +ve and STEMI -ve on ECG, then further classified as to whether they had OMI criteria.
Does this really matter, as some early studies indicated that early angiography for undifferentiated NSTEMI patients does not give better outcomes(4,5)? When we look at these studies, we find that patients with persistent symptoms were not included and that the interventions, were not acute, but significantly delayed.

Definition of a STEMI

The fourth universal definition of myocardial infarction(6) gives ECG criteria that are suggestive of Acute Myocardial Ischaemia, in the absence of left ventricular hypertrophy or a bundle branch block. They are:
ST Elevation
New ST-elevation at the J-point in 2 contiguous leads with the cut-point:
(A new J-point elevation ≥1 mm (compared with the earlier electrocardiogram) should be considered an ischemic response.)
ST Depression and T wave changes
New horizontal or down-sloping ST-depression ≥0.5 mm in 2 contiguous leads
and/or
T inversion >1 mm in 2 contiguous leads with prominent R wave or R/S ratio >1.

Definition of a STEMI Equivalent

​These are ECG changes that represent a coronary occlusion, without showing traditional STE. These patients would benefit from percutaneous coronary intervention.(7) We can use various STEMI Equivalents to predict OMI, when STE criteria are not met. Below you will find 10 examples of STEMI equivalents.

J.E. Bischof et al. / American Journal of Emergency Medicine 34 (2016) 149–154
The ECG shows very mild STE in lead III ie.,  not in 2 contiguous leads. There is also a mild downsloping of the isoelectric line in II, aVF and V6, which may seem like a Spodick sign, indicating pericarditis. However there is STD in aVL. It does not fit the classical criteria for STEMI, it is a STEMI equivalent and predicts OMI. The patient had a 99% mid Right Coronary Artery occlusion.
T wave inversion in aVL is associated with impending inferior wall MI or Mid LAD lesion(10). aVL is the reciprocal lead for the inferior part of the heart.

​Approximately 1/3 of inferior MI’s have right ventricular involvement. In half of these patients it is of haemodynamic significance. Suspect it when see STE in V1 or inferior STE maximal in lead III. These patients require a right sided ECG leads to look for STE > 0.5mm, especially in lead V4R. STE in V4R has a high sensitivity for a high RCA occlusion.

​T waves are out of proportion to the preceding R waves. This especially important if there is STE and/or reciprocal changes . The T waves are wider and less symmetrical than normal T waves.
The ratio of T wave to QRS should > 0.36
Hyperacute T waves in two contiguous leads may precede STE. It is usually associated with left circumflex disease.
It presents in about 2% of proximal LAD occlusion. 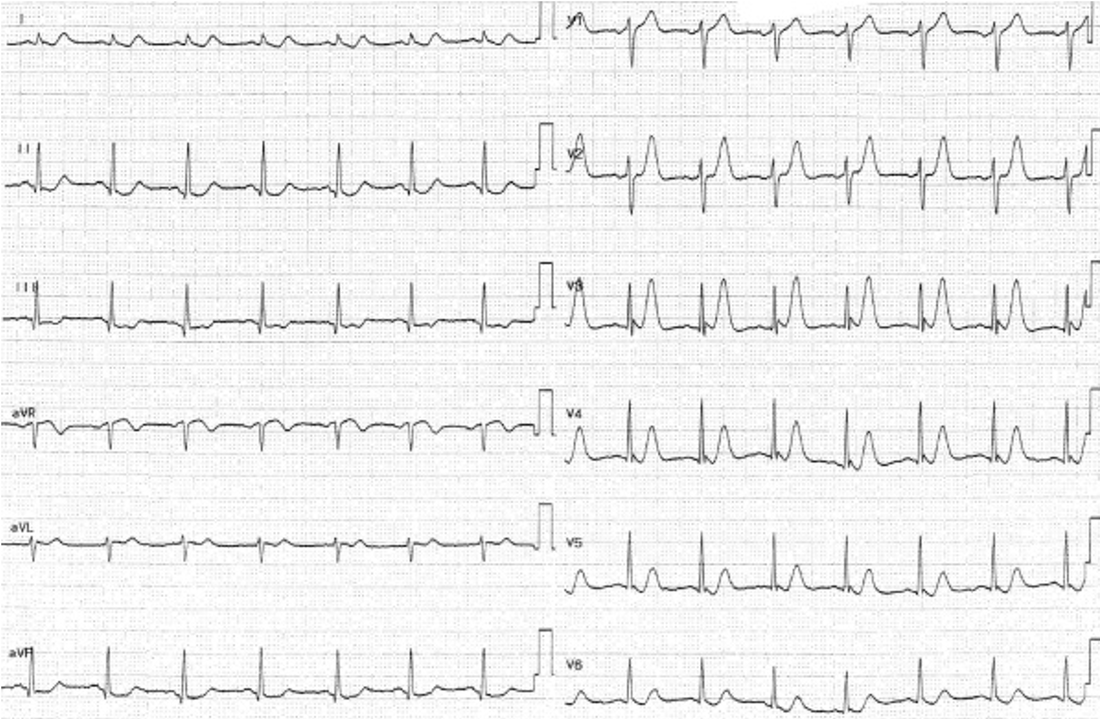 It is a reperfusion pattern that is highly predictive of proximal LAD stenosis.
20% will have a 100% LAD occlusion with collateral flow. If not picked up 75% will progress to AMI within a week.
It presents as one of two patterns shown below.

Wellen’s Syndrome was first described as an inverted U wave as early as 1980 and then introduced by Wellen in 1982 as Wellen’s syndrome, the name by which it is known today.
The pattern represents a significant major coronary artery stenosis. More specifically a Left Anterior Descending(LAD) artery stenosis. In most cases this is proximal, but it may be mid or distal LAD. It is a major stenosis. If the pattern is not recognised and the patient is untreated, up to 75% of patients will have an anterior wall myocardial infarction within days/weeks. Because of this it has been called “The Widow Maker”.
How to Recognise the Pattern?The peculiarity of this ECG pattern is that it may not appear when the patient has pain. In fact the only finding when the patient has chest pain, may be a small negative deflection at the end of V1 and V2 . The T waves become deeply inverted when the patient is pain free and represents a reperfusion of the myocardium. Cardiac enzymes will be normal in most cases or mildly elevated.
Characteristics of The Syndrome

A new RBBB may be associated with poor outcomes in coronary artery disease (11). It indicates a proximal LAD occlusion.
Hazem(12) found a greater chance of all-cause mortality at 30 follow-up compared to those without bundle branch block. In one study(13) 26% of left main coronary occlusion  presented with RBBB without STE.
When compared to patients without a RBBB. Those with a RBBB had a significantly higher 30 day mortality(14). A RBBB was found to be an independent predictor of increased mortality.

This is an example of a non-occlusive myocardial infarcdtion. It is usually due to LMCA or peoximal LAD insufficiency.
The pattern is not specific only for LMCA/proc LAD as it is also seen in pulmonary embolism, aortic dissection.
aVR looks at the right upper portion of the myocardium ie., the RV outflow tract.
If STE > 1mm in aVR or V1 with STD > 1mm in > 6 leads it can suggest: 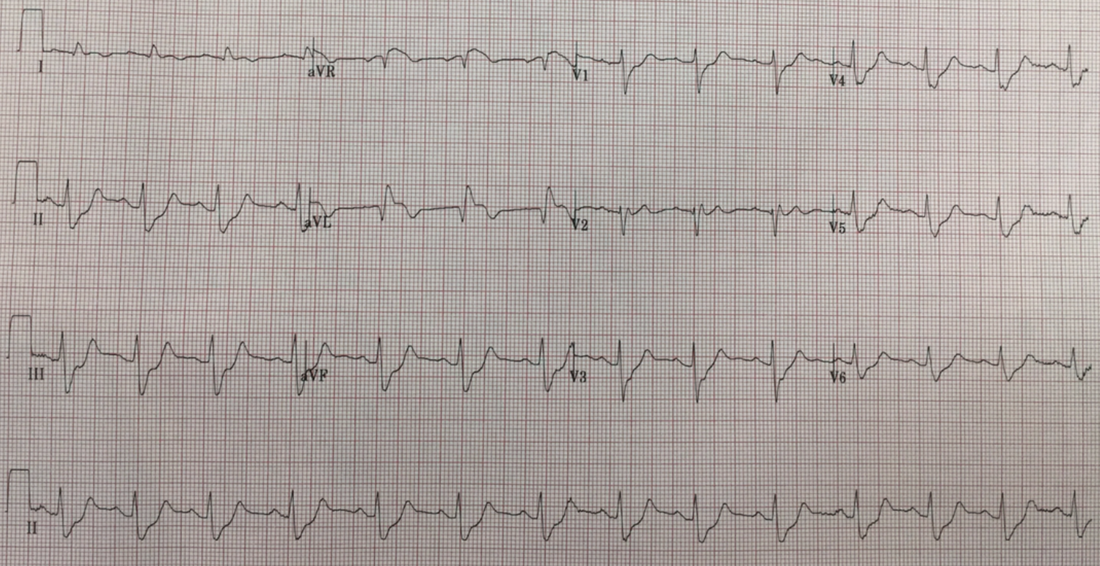